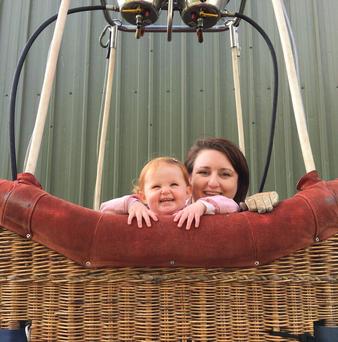 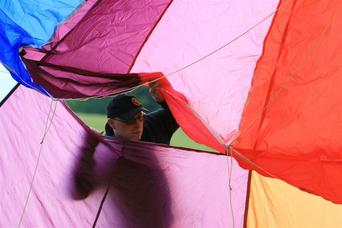 Altitude has been a little while in the making but, started trading in July 2016 and is owned and run by Laura Durcan alongside Co-Director Brendan O'Rourke.

A little bit about Laura -

Many of you will already know me from either my time at HSBC/ Marsh and/or from various balloon meets and festivals but for those who don't, here is a little background.

In 2005 I started working for HSBC Insurance Ltd (to be taken over by Marsh Ltd) in their General Aviation department, supporting their Scandinavian book of Light Aircraft business and specializing in Hot Air Balloon insurance. Over the years with HSBC/ Marsh I dealt with a wide variety of insurances for many types of aircraft operators - Hull & Liability for Balloons/ Aircraft/ Helicopters/ Gliders, Employers & Public, Airport Owners and Operators and Office.

A few years after I joined HSBC, at my first balloon meet in Northampton, a client told me that I couldn't possibly know what I was insuring unless I had experienced it for myself; that ballooning was not like any other form of Aviation. Despite hating the first 20 minutes of that first flight (I don't like heights), I now hold that man (along with a few others) responsible for making me fall in love with the most amazing sport/ hobby/ activity! Since then, I've been trying to get airborne as much as possible and have travelled to meets and festivals around the UK and in Ireland, France, Italy and Switzerland; meeting and making friends with some amazing people along the way.

During a meet in 2012 I was asked why, since I seem to love flying so much, I wasn't actually learning to fly. After a few moments of trying to formulate a response, I realised I didn't actually have a good reason to give so, after that night, my journey as a Pu/t began.

​Looking back at the comment that first got me into a balloon, I have to say that I completely agree, ballooning was something I had to experience for myself. I like to think that my experiences as a passenger and Pu/t, have done and will continue to, enable me to carry out my job to the best of my ability. I never wanted a career where each day was the same and I was stuck behind a desk all day, I count myself very lucky that specialising in Hot Air Balloon ​insurance and now, via Altitude, being able to offer such a wide range of different insurances - not just aviation related, I am now specialising in insurances such as Tradesman/ Public Liability & Employers Liability - enables me to experience what I do, allows me to travel to some amazing places and offers me a different challenge each time I check my emails.

A little bit about Brendan -

Brendan has also been in the ballooning 'world' for a while now, and again, many of you may already know him from various balloon meets and festivals but for those who don't, here is a little background.

Thanks to a chance message sent on Facebook to an old school friend not seen for decades, for the past decade or so Brendan has been acting as crew for local balloonists (both Private and Commercial) - Brendan had seen that this old school friend was a balloonist and was cheeky enough to ask for a flight, after that first flight he was also hooked! ​

Up until 2018, Brendan only occasionally liked to get off the ground (being a former Irish Rally Champion, he preferred being behind the wheel and in charge of the retrieve fun) however, in the summer of 2018 he decided to make use of the kit we have and as of April 2020 is now the proud holder of a PPL (Balloon).